Yesterday was my birthday! Happy birthday to me! Therefore we deserve some updates (so that I don't leave this blog saying I'm 25 until I'm actually 27).

Life has been crazy and lovely but mostly crazy. And I have tons of stuff to do, so there's really not much time to say anything else. I've got to work and to finish Middle Passage in record time.

So, without further ado, back to translating.
Posted by Irene Flores at 11:07 AM No comments:
Email ThisBlogThis!Share to TwitterShare to FacebookShare to Pinterest
Labels: Life

I'm done crying. I'm done regretting. I love you like the sun, like you love breathing after thinking it's going to stop, I love you. I never thought about love except as heartache before. I had this foolish idea that love was accompanied always by tears, that suffering was intricately related to affection. You are joy, you are what makes my heart beat everyday.

I know that work and toil are worthwhile because they mean a little more mortar in the life we are building together. I know that I can face the day because I'll come back to you at night. I know that I am worth something because you never get tired of repeating it. You tell me that if we weren't together then there would be nothing in my way. I say to you, if you were not in my life I would have never had the courage to want, and then the temperance to accept. I wish I'd been born loving you, because then you would have made me undefeatable.

You asked me what was missing. You told me what you weren't giving me. But the truth is that you give me everything there is to give. Everything. You are so hurt now that I need to ask, aren't you wrong? Isn't it something that I am not giving you? If I could but love thee better. If I could make you feel, as you did to me, like Cordelia, like in a stormy and implacable world you can be rescued by the word "enough". I've told you, but... now I need you to do this for me. I need you to tell me what it is that makes you happy, so I can do it over, over, and over again.
Posted by Irene Flores at 9:36 PM No comments:
Email ThisBlogThis!Share to TwitterShare to FacebookShare to Pinterest
Labels: Life

This has been ready since like early fucking February, but work and school and more work have made life crazy lately. I've really had no time to write anything down and do the Photoshop preparations. And I didn't want to just post everything in rough because I have a method dammit! And by golly! I'm sticking to it!

Other than that I always really like to blab about drawings, so here we go.

This. Character. Was. Hell. To. Draw. Elf lady, I hate you! Hate you with the fire of a thousand suns! You and your crazy ears! And yet... and yet... you do look so pretty in that hairdo and with your aristocratic cheekbones. This here is the mother of Saira Shadowsong, she is, of course, queen of the aforementioned pet country and ought, I think, to look quite regal, icy and aloof. But other than that, I had a lot of problems properly visualizing this character. I think a lot of it came from trying to work from the very clear idea of her that my DM has, instead of forming a personal vision from which to work. He chose the model and a lot of the clothing. This whole contribution was very important to the process because he has a very clear visual idea of his world and especially for this character.

But I have to admit that in this case it was kind of limiting and a bit frustrating. I think this is one of the reasons why this method of the 4 pages of sketches is very important. Starting out so unsure and encountering so many visualization problems and having to trudge through so many of the sketches became a lot easier to accomodate once I realized that I had plenty of room to fuck up. A lot of the sketches are pretty unweildy and I'm not too happy with ALL of the ones I chose for coloring (probably because my DM chose some of them and we have different aesthetic standards). But I do think that in the end, I got a decent enough sample and a couple of drawings were I really "caught" what was my personal vision of the character. 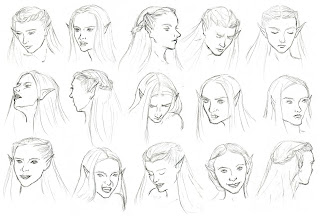 The model is an actress by the name of Amy Manson and most face sketches here were taken from her role as Lizzie Siddal in Desperate Romantics. As I mentioned before, the whole chosing an actor/actress for a model is very useful but also at times frustrating. You realize a lot about the quality of acting when you're doing an exercise like this one. Some actors always have the same expression. Some actors never risk powerful emotion. Amy Manson, I feared, would be one of these. There was a lot of soulful staring from her green, green eyes and a lot of pouty moping. BUT she ended up suprising me as there was also a lot of range there. Less so, I still think, than what I got from Ellen Page. Though it might be because of the difference in portrayed characters. Anyway, what that did was give a very clear difference between Saira and her mother and their respective features and expressions. 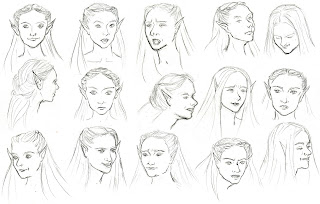 
Even these are still good reference, though a lot of them I think I need to redo. A few were rushed and weirdly enough I wasn't nearly as happy with the profiles as I could have been. A lot of that, I think, is due to the fact that Amy Manson wore a gorgeous wig for Desperate Romantics. So gorgeous in fact that she scarce did anything with it and managed to make it cover her ears at all occasions O_O. I know those are elf ears there but dammit if I wouldn't have liked a little reference as to where I should place them. The ear reference came mostly from my hair reference which was Gwyneth Paltrow in Shakespeare in Love (oh those renaissence hairdos!) 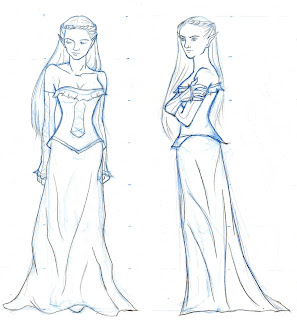 I was extremely unhappy with the skirt here. I just don't seem to have the hang of long skirt fall and it shows. I was in too much of a rush to search for proper references and it shows. Once I ink them I'm going to have to work this problem out, truly.

Well that's all for now, thought I'm about halfway done with the next two sets, which I hope will be showier. I was afraid that Saira and Lhyarian looked too much alike to properly work out variety. But next in line are the manzorz! Yay! And also a remake of the marvelous, boobless cleric. Alas, I need to work on the bodytypes.