(Transcribed from my iPhone voice notes)

I dreamt of a huge library. I think in my dream it was the Library of Alexandria or something like that. It was hidden underground and we were going there through an expedition... It looked a little like the Disney movie Atlantis.

There were lots of boxes and chests, colorful containers of great secrets. Eventually I had to fight... Well, no, it wasn't me. The main character of my dream had to fight some sort of Satan-like figure. There were lots of motifs in the dream that looked kabbalistic. The main character character of the dream was like an angel of wisdom, who started out as a human being, incarnate... she had to wake up to this identity of hers.

There were tarot motifs and it reminded me a little of the movie the Ninth Gate.

In the end, she had to take all the objects that had survived the fight, the disaster. They were huge chests full of things. The chests opened like puzzles (in real life I have a wooden box that opens like this). And it was not just that these huge chests were full of books and scrolls, or even full of magical things... they were like doors, providing access to other dimensions. They were magical themselves.

When we opened it, people who weren't the guardians of this chest, it took us to see a place that looked like the fields of Elysium... and there was an enemy of ours there (must be all the Saint Seiya I've been watching lately).

The guardian of this chest was Polly, my cat, and she had to learn how to use it and teach me how to use it myself. And it seemed like I wasn't the first person who had to... well, once more, not me, but rather the main character of the dream... The main character was not the first person who would have this role, as guardian of all this information, all this knowledge, but rather, it was something to be inherited, something to be remembered.

There was a sort of battle in the dream, and we lost a lot of this informaton, of the chests and treasures carried by the expedition. And it was a tragedy, because so much knowledge was lost. We had lost these things because of that devil-like figure, this dream-Satan who kept trying to trip us up.

It seemed like a sort of illumination, like reaching an awareness of one-self. The protagonist of the dream had to realize that she was the guardian of all this knowledge, all these magical things, these talismans, little by little. She had to wake up, little by little, to her role as the person chosen to take care of all of this. 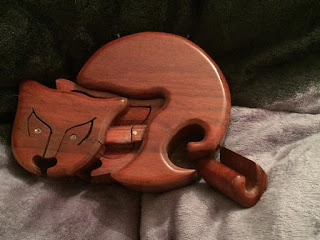 (Told you I had a cat puzzle box)