I had a strange dream some days ago. I had been discussing fiction about child molestation and the sort of monstrous father who would keep his own daughter a prisoner and a slave for years, to keep her for himself.

I dreamed of a little girl with pigtails who lived with her parents in the woods. They were poor and had no other children. Once in a while the father would take his little girl out into the woods and rape her til she dropped and leave her there. Her mother knew but said nothing. I believe she did not particularly care for the child.

She found a tide pool and laid herself in it. Strange, viscous creatures emerged from it and began to consume her. They ate her in a way that was very like her father's rape. They took her in. When they were done, a monster emerged from the tide pool.


I've had a weird image of her all week. Not in any way as clear as my other dream's images but real enough. So I had a go at drawing her. 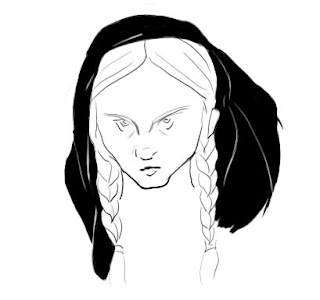 This is the first drawing I make entirely with my tablet. It needs work.
Posted by Irene Flores at 8:53 PM
Email ThisBlogThis!Share to TwitterShare to FacebookShare to Pinterest
Labels: Dreams, SAI, Sketch