I'm exhausted. I think I burned out on the stupid drawing. I'm still not entirely happy with the right hand or the boots but I think for the moment I can live with them... for now! I'm just so happy I dared to finish this effing thing.

Also, isn't Mitsu sexy? I love him forever and his stupid heavy metal and his stupid pretty hair. I'll fix all that is wrong with this drawing when I can move again.
Posted by Irene Flores at 12:30 PM No comments:
Email ThisBlogThis!Share to TwitterShare to FacebookShare to Pinterest
Labels: Lineart

Sooooo, still translating and still working on Mitsurugi drawings. Not much progress on either but at least, between collecting tons and tons of reference pics of nekkid men, I've been kinda working out the pose I wanna draw him in.

My first attempt sucked. Mostly because I was using reference pics that weren't full-bodied and I was having trouble imagining how the legs behaved. Have you ever noticed how many pictures are cut off at the hips? Stupid eighties metal bands can't be bothered to be pictured with their legs apparently. In conclusion, Ire sucks at drawing legs. Thus, practice, practice, practice. If it hadn't been for Posemaniacs I would have been completely screwed. 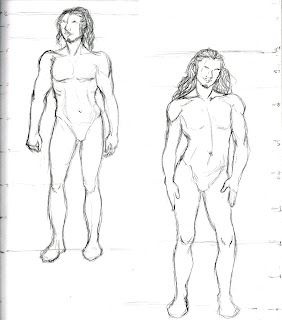 Attempt #1 is the one on the left and I'm, naturally, quite unhappy with it. Thought Attempt #2 is certainly better, especially in regards to the feel of the character it still makes me a bit uneasy. I think the long hair makes him look too much like Fabio to me. Also he needs either fattening up or slimming down depending on what version of him I wanna draw. I'm probably going for the skinnier Mitsu, which is a frightening prospect since he is a big-boned boy. Ooooh, the troubles I get myself into!
Posted by Irene Flores at 2:48 AM No comments:
Email ThisBlogThis!Share to TwitterShare to FacebookShare to Pinterest
Labels: Sketch
Newer Posts Older Posts Home
Subscribe to: Posts (Atom)