Getting over my fear of CG coloring, one Sashka at the time 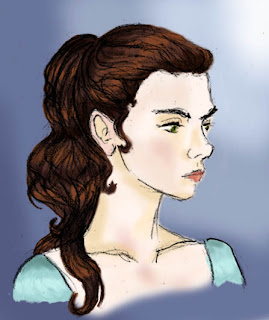 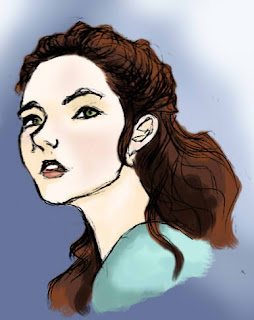 (I totes love you Sashka! And you're definitely going to get that dragon booty!)
Posted by Irene Flores at 2:34 PM No comments:
Email ThisBlogThis!Share to TwitterShare to FacebookShare to Pinterest
Labels: DnD, SAI, Sketch

I've been considering that maybe starting on my beautiful and beloved sketches mentioned below and expecting to uncover as of yet unknown mad tablet skillz is perhaps not the wisest course of action I could possibly take.

In consideration of this most uncomfortable thought I have come to the conclusion that I may, perhaps, in view of the circumstance and my prior terror of the tablet, be in need of some practice. And because I obsessively stalk Derre, I have decided, with her recommendation, to give the program she is currently using a try in order to get some much needed practice in the tablet department. (Before I proceed to thoroughly ruin my beautiful half-elven vampire princess sketches (Look! I made it sound tackier! (Parenthesis totally give me a false sense of security)))

SAI is actually a simpler and much friendlier program than the more sophisticated Photoshop. Like Derre said, it's all fun and games when you have a tablet and much sadness if you don't.

So, without further ado: 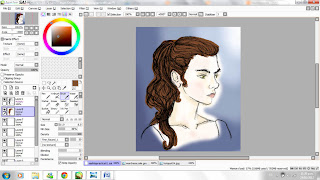 I shall now stop desperately procrastinating and continue trying (instead of working like I totally should :D) Hopefully, I'll be able to post results soon enough.
Posted by Irene Flores at 9:26 PM No comments:
Email ThisBlogThis!Share to TwitterShare to FacebookShare to Pinterest
Labels: SAI, Sketch

I have been delaying posts for several weeks (despite a terrible temptation to post early efforts) because I've been working on a BIG character design project.

I've decided that enough is enough and slacking on drawing and doing no preparation for it is quite as bad as slacking on translation and doing no preparation on it (which I of course NEVER do :P). So as soon my DM and I agreed that I would be doing the illustrations for our D&D campaign, including NPCs and everything, I established a system for myself... one I intend to keep despite all evidence in my history showing otherwise!

The end result is that for each character I'm making four pages of face sketches and two full-body sketches, to establish character features and design AS WELL as character expressions and clothing designs. I'm trying to start with what I know before I go in over my head, even though I do want to eventually leave my comfort zone and go all the way to designing the landscapes, artifacts, creatures, armors, weapons and all the standard fantasy fare. I really am an awful, awful fantasy NERD, so I'm super excited at the idea of drawing dragons! Yay! Even though I suck at anything not people-related and drawing pointy-ears on people makes me feel extremely akward self-conscious.

So after weeks of distractions and jumping ahead and plodding along, I have the first concrete part of the first character design. And I have to admit that despite the seemingly slow going this new approach has had quite amazing results. It's not that every drawing coming out of my sketchbook is gold... rather, it's been an experience with the laws of probability. Tons of sketches mean that there's a bigger chance that some of them will, in fact, turn-out decently. So even if I'm not happy with all of them, I still have quite a few of them to work with.

Saira Shadowsong belongs to my DM and is the princess of his pet kingdom. She is in fact a half-elven vampire (my god, that sounds tacky! but it's really not, I promise). I'm concentrating on her royal family since the designs are similar and they are actually rather fun (and annoyingly unlike what I am used to drawing).

My model for her was Ellen Page in her role as Hayley in the movie Hard Candy. Finding models for the characters has been tricky but particularly fun because screencaps from movies let you catch people making expressions not usually found in photographs for which they are actively posing. I've actually begun to develop a new respect for certain actors simply because they have given me a far greater range of expression. Ellen Page is a magnificent example, since through the course of Hard Candy she managed to express emotion in ways I had never considered drawing. I think the design benefitted from this quite substantially.

I've organized these in three categories.


The first part consists of the sketches I am particularly pleased with and for which I've decided to eventually make colored versions. I think applying color to a bunch of these smaller sketches will help me get a hang on the color-scheme for the character before moving on to the full body drawings. And it'll be good practice for my graphic tablet which I have yet to stop fearing. 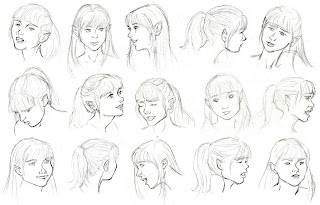 You will note how fond I am of profiles (which has nothing to do with how super easy they are) and in the course of these exercises I've discovered that I'm actually very fond of the back of the head since it allows me to always be aware what the characters' hair looks like from behind.


The second part is made up of the sketches I'm not terribly fond of. For some time, I considered to not even bother uploading them. Part of the problem is that due to angle or expression they don't seem that closely related to the above. Obviously, I had yet to get the hang of the character's basic features, which is always one of my main concerns when designing: making faces distinguishable. However, I think that even if they are rather flawed I actually learned a huge lot from them. 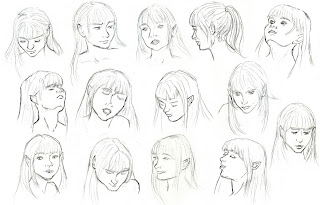 
In many ways they are the most adventurous of the drawings and it is no wonder that they didn't come out as neat as those I included above. They forced me to consider angles I almost never draw but which are obviously very necessary. I'm still keeping all of them as reference and I think it'll be interesting in retrospective, when I get more comfortable with these poses. Maybe this division will help me acknowledge all the things I still need to work on.


The third part is made up of the two full body drawings of the character in casual clothing. I think in the long run these are going to be the trickiest of them all. They have to balance a whole lot of different elements that I think SHOULD be considered in character design and are often not. In a way these designs are my way of trying to do right, what I've seen done wrong too often (and by people who have a whole lot more talent than I do). Characters ought to have different body-types, clothing in different countries ought to be different and in spite of stylisitic nods it should be FUNCTIONAL. This is in addition to everything that straightforward character design does (especially for a fantasy setting).

I've also had to deal with the fact that a lot of these designs are made not according to my taste but according to the DM's taste, since these are of course his characters and he knows them best. He has his own ideas of what they look like, and as we tend to do, they are borrowed from other sources. So it's been a collaborative work, to try to produce an original design that looks like what he had envisioned for them. 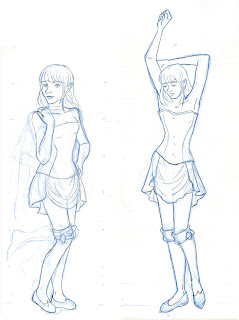 I've been trying something new that I've heard of a lot: doing the sketching in blue and then coloring over with the graphite. It was actually incredibly fun and very instructive. Most of my art teachers have always told me not to erase my work, since the lines you consider mistakes actually point you towards the lines you SHOULD be drawing. It's true.

I'm not terribly pleased with the first attempt (the one on the left). I hadn't really gotten the feel of the character and was more concerned with trying to figure out a difficult pose and the clothing design than I was with the overall result. It shows, badly. Once more I decided to include it because I learned a lot from it, particularly in the sense of keeping it simple.

Two sources are to be credited here I think: firstly, the eventual color-scheme and the lovely stockings which were pointed out to me by my DM. We have shamelessly stole from what I understand to be the character design of one Sierra Mikain from the Suikoden game. It really is a lovely design and it gave me the general feel of what my DM wanted in this design. But at the same time it set me on edge since I didn't want to actually COPY someone else's work (stocking theft notwithstanding).

The second source is more of a personal point of amusement for me: the skirt is actually from an ice-skating outfit. I wanted to point this out because I think I shall continue to steal from that sport in particular. A lot of the many problems I always seem to encounter in fantasy art are related to the impossibility of the clothing, the fact that it doesn't work. This is a constant source of disappointment because the clothing is more often than not devastatingly beautiful. In a way I think ice-skaters can have their cake and eat it too without this problem. Their outfits are built as much for show as they are for functionality.

I like to think that in many ways that's what I want to attempt with this project: to show that fanservice, beauty, coolness and all those other wonderful fantasy things do not have to be dependent on everyone straining to their breaking point in order to suspend their disbelief for the sake of the boobies.
Posted by Irene Flores at 3:06 PM No comments:
Email ThisBlogThis!Share to TwitterShare to FacebookShare to Pinterest
Labels: DnD, Lineart, Sketch
Newer Posts Older Posts Home
Subscribe to: Posts (Atom)