I was getting sick of working with characters I barely knew, who didn't belong to me and had very little development possibilities in the immediate future. So during the last couple of months, in an attempt to get over my art rut, I've decided to go back to some of my old favorites.

I've been retooling my old RPG character Elaine a bit, just to make her features a little more clear in my head (you know, beyond "tiny, curly-haired and turned up nose"). I tend to use actor screencaps as models for the first batch of sketches and then refer to that batch for further attempts. I know it's a bit lazy and I feel sort of a cheat but it does help me with a number o things; amongst them the very problematic issue of expressions.

So long story short, Elaine has been revamped using a tiny Jodie Foster as reference (I just had to! It was that lovely bump on her nose!). Which means I had the pleasure of watching "The Little Girl Who Lives Down The Lane" over and over again in an attempt to get some good screencaps. Die Martin Sheen, DIE! 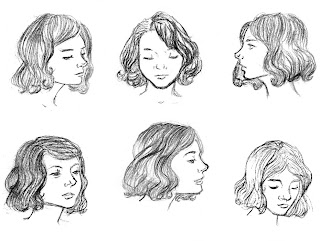 This has been particularily interesting because I'm going to start working on a character design for Elaine's father. Most of my lame excuses regarding her lack of resemblance to her mother went along the lines of "meh, she looks like her dad!". Well, now I'm going to have to put my money where my mouth is.


Aside from Elaine, who is so oooold, ooold that she should be senile already, I've been working on a character design for one of my boyfriend's most endearing creations. He's newer (and of course hipper) and of Asian descent; which means I got to work outside of my comfort zone for a change. Big Japanese man with a beard. I can't get more uncomfortable than that. Fortunately for me, my boyfriend is not a hack and kinda had a model in mind for his character already. This made getting screencaps a lot simpler.

Kenta Kiritani was the chosen model for Mitsurugi Moto, a character originally made for the L5R setting and later adapted to a couple of other games. I got all my screencaps from the movie "Beck" and was very glad because Mr. Kiritani pulls a lot of very interesting faces in that movie. 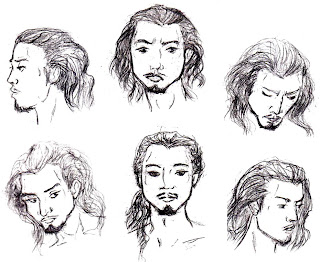 So quite a bit of work buuuut the problem is I'm still slacking. I should be working on some full-body drawings so  I can fiddle around with clothing and proportions. Mitsurugi is BIG and Elaine is a tiny thing and I hope to draw them kissing at some point so I forsee a nightmare of proportions in my future. Sighs. Back to translating before getting all obssessed over drawings.
Posted by Irene Flores at 3:34 AM No comments:
Email ThisBlogThis!Share to TwitterShare to FacebookShare to Pinterest
Labels: KoW, Sketch

A Change of Pace

I had already resigned myself to never posting in this blog again. I had thought I was quite beyond it and that it would serve no useful purpose. However, due to popular request (ha!), I think I can at the very least attempt to find a use for this place (other than adolescent angsting, having, hopefully, outgrown it by twenty-five).

So if nothing else, I'll try to fill the pages, errm blog entries? Well, I'll attempt to fill this thing with the odds and ends of my life. Mostly the stuff nobody else cares about. Sketches, paragraphs, character notes... anything I can think of. It will, perhaps, teach me about constancy again.

And because the people who have encouraged me to attempt this again deserve a little bit of attention I'll try to turn comments back on. If I can figure out the new blogger controls...
Posted by Irene Flores at 8:29 PM No comments:
Email ThisBlogThis!Share to TwitterShare to FacebookShare to Pinterest
Labels: Blog
Newer Posts Older Posts Home
Subscribe to: Posts (Atom)