Fynn Sketchwork (Or This Ship Will Carry Us Safe to Shore)

It's been a couple of rough months, emotionally speaking, and I've scarce had the clarity to try to write anything down. But enough is enough and a new year has come and gone and I've turned 27, which I guess, are sufficient reasons to put some sort of update here. It would be a terrible shame to turn 28 before the blog actually acknowledges my 27ness. I also have some new sketchwork! Which means I can forgo dangerous introspection and focus on work like the dirty, dirty coward I am.

The idea when I first started designing this character's look was to make her solid. Big and solid and manly. There are so many clues we have regarding people's gender. I think it must have been easier to disguise it back when breeches meant man and skirts meant woman. So here I am, terribly unsure on whether Fynn could in fact be mistaken for a lad in spite of her oiled plait. I guess if you can convince people that Keira Knightley can pull it off, then it's not such a stretch to imagine this girl can.

There's also a big secret here, and I guess it's less visible with the limited opportunity for clothing design but...

I'm a huge sucker for sea-yarns. Oh man! I love me some age of sail adventures! If there's a storm and pirates and endless tasks and a captain's brutality, all the better! I can't wait for The True Confessions of Charlotte Doyle to come out as a film!

Anyway, on to Fynn, cleric of Mephistopheles! 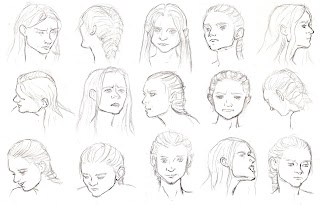 Fynn Face Sketches to be colored

I completely changed the original idea for her model because of the overwhelming success I've had with actors vs other personalities. There is just no other way to capture the very different emotions that actors can portray. Viva le screencapping! The first model was PJ Harvey, but getting pictures of her was kind of a drag and none of them had the variety in expression that I'm come to rely on. This version is based on Ann-Marie Duff, especifically, Ann-Marie Duff in all her makeupless glory in the Magdalene Sisters! I discovered she is exactly what I wanted. PJ Harvey was much too much the enigmatic rockstar. She might not be conventionally attractive but she has the raw sensuality that performers often effortlessly acquire from their work. In the Magdalente Sisters, thought,  Ann-Marie Duff manages to embody the sort of plain, solid integrity that I wanted for Fynn, but also, the hint that she may not be as unattractive as she thinks she is. 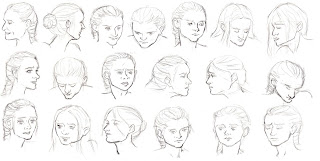 One of the little details that I loved in this sketchwork was the plait. It's called a fish-tail braid and I have a lot of hands-on experience with this braid, having decided long ago that it was the look I wanted for Fynn and therefore practicing it constantly on myself and others. I love this sort of details, understanding how a certain hairdo may change a character's look and overall impression. I even know what sort of underwear they're wearing sometimes! It's crazy! But I love it, so many of these things tell us so much about the characters and are so useful when you face unexpected scenes. What does the hair look from above? What will the character look like if she's drenched? 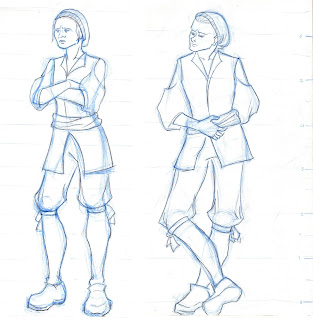 I was looking for too much power in the legs and messed it up really badly in the second sketch. I'm beginning to think that until I try to do a lot more of these, one of them is always going to come out sucky and the other one kind of goodish.

For Fynn, and really for the Shadowsongs too, there's a lot more I want to do in terms of color, but I think I've got to get a really good hang of the lineart before I start messing with color. I think color is going to make a very dramatic change in the characters. Like I said, the devil's in the details and that's certainly true for a character like Fynn. In contrast to the Shadowsongs, she is a peasant, so she wears old clothing, with drab colors, being unable to afford the more expensive dyes. But I think that's why I added those ribbons and that sash, to give her a splash of color, a senseless attempt at coquetry. I think all her coquetry has a certain awkward self-awareness to it. Someday, I shall dress her in red and she shall be a different woman...

Not that she'll behave any differently but still!